Remy or Lambert, who should play with Sturridge?

After losing Luis Suarez to FC Barcelona, who should play with Sturridge Remy or Lambert, see detailed stats here of 2013-2014 Premier League season.

After losing Luis Suarez to FC Barcelona, Brendan Rodgers is looking to invest his money in buying new players. It’ll be a difficult task for any manager to replace the player of immense quality like Suarez with someone but Liverpool Manager is working very hard to make it possible.
In a recent interview, Rodgers was quoted as,


"He's a fantastic player but we will move forward and there's real excitement going into this season.’’ 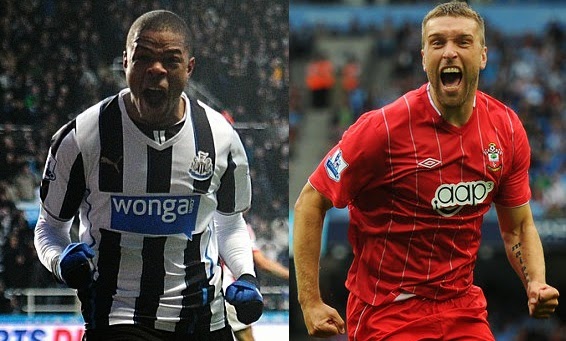 Thus Liverpool is really busy going into the new season. So far they’ve been linked a number of players and already signed the likes of Lazar Markovic, Rickie Lambert, and Adam Lallana with Loic Remy and Dejan Lovren all ready to join them. It seems that the position vacated by Luis Suarez should be taken by either Loic Remy or Rickie Lambert. Both of these forwards had an impressive last season. Remy deal is most likely to complete this week with a fee of £8.5million already agreed with QPR. So now the question is who should be a regular starter for Liverpool and who can make a successful strike partnership with Daniel Sturridge?

If we look at the age factor, Loic Remy has a clear edge. In comparison to 32-year-old English Striker, Remy is currently 27 and still got a lot of football in him. He can change himself according to Liverpool’s philosophy while Lambert will find it difficult to adapt to such creative thinking at this part of his career.

If you look at the second striker role, this is where Rickie Lambert comes into play. He assisted 10 goals last season, 7 better than his counterpart Loic Remy. Keeping Daniel Sturridge in mind, Rodgers will surely let him play at his favourite position instead of playing him out wide.

If we look at the goal each striker scored last season, Remy leads Lambert by only 1 goal. Even though this is not a big difference but Remy’s short to conversion rate make him superior to Lambert.

But one major thing that goes in Lambert’s favour is his consistency. After scoring 13 and 15 goals in his last two seasons, he just might be the man Brendan Rodgers will look to play. On the other hand, Remy had a disappointing first season with QPR, scoring just 6 goals. In his second season, he improved lot but keeping in mind his injury factor, Lambert has the key factor here.

So it’ll be a tug of war between both of them to grab a regular spot in starting eleven. And Rodgers will be happy to see it that way as Liverpool has to fight on four fronts this season.