Tottenham Hotspurs, Liverpool, Porto, Manchester United all have earned huge profits in the football transfer business. While Real Madrid, Monaco and Paris Saints German are the sides who have paid that amount to make it possible. 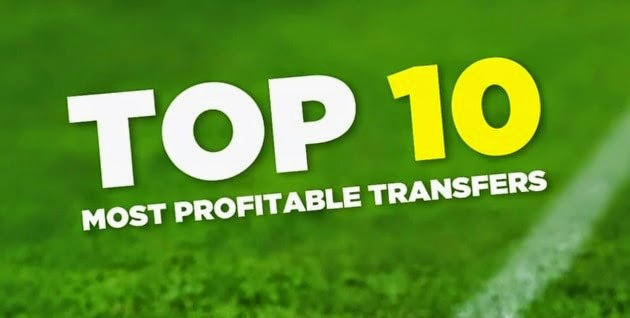 Below are the top ten most profitable transfers.

8. Radamel Falcao
Porto paid £2million for Colombian striker in 2009 and sold him to Atletico Madrid for £41million in 2011.

7. Zlatan Ibrahimović
Italian side Inter Milan signed him for £22million in 2006 and sold for a price of £40million along with Samuel Eto’o (£60million in total) to Barcelona in 2009.

6. Edinson Cavani
Paris Saints Germain paid a huge amount of £55million to Napoli in 2013 who bought the Uruguayan for £14million in 2010.

5. Zinedine Zidane
Fee of £3million which was paid by Juventus in 1996 changed to £46million in 2001 when Real Madrid bought him.

2. Luis Suarez
Liverpool made a £52.2million profit after the sale of Luis Suarez this summer. Barcelona paid £75million to LFC who bought him for £22.8million in 2010.

2. Cristiano Ronaldo
Manchester United bought the Portuguese attacker for £15million in 2003 and sold to Real Madrid for £80million in 2009.

1. Gareth Bale
In 2007, Tottenham Hotspurs signed Bale for £10million and sold him to Real Madrid for a world record fee around £85 million.