Brazil have always been a country in terms of producing top talents. Since the start of football, Brazil have produced great player from Pele to Ronaldo and now Neymar. Real Madrid, Paris Saints Germain and Manchester City are the sides that have splash money on the Brazilians. 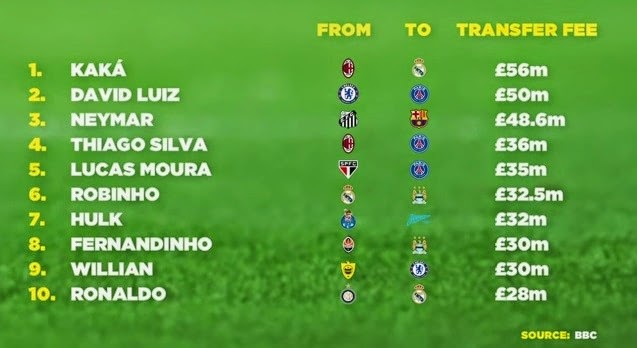 The below list have majority of transfers from the past year.

7. Hulk (Porto to Zenit Saint Petersburg)
The Brazil international attacker signed for the Russian side for a record fee of £32million from Portuguese side FC Porto in 2012.

2. David Luiz (Chelsea to PSG)
Brazilian centre-back was signed by Paris Saints Germain for fee of £50million from Chelsea in 2014 summer.