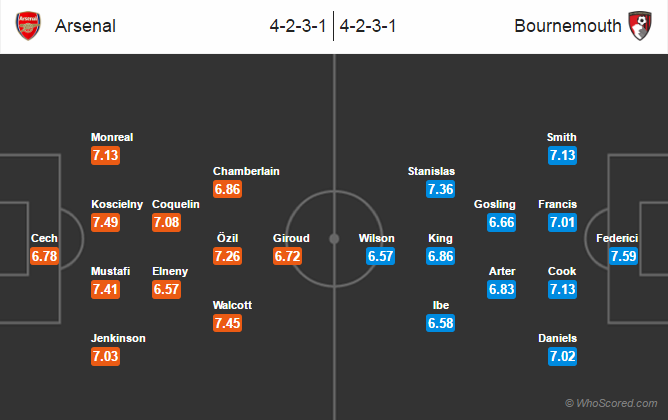 Team News:
Arsenal
Arsenal manager Arsene Wenger is planning to make some changes to the starting lineup. Alexis Sanchez could be rested for the future important games.
Nacho Monreal and Petr Cech both were rested in the Champions League game against Paris Saint-Germain recently, they both are expected to return.
Hector Bellerin and Santi Cazorla are out through injury.
Aaron Ramsey and Francis Coquelin are likely to keep their place in the midfield.

Bournemouth
Jack Wilshere will be unavailable for the visitors this weekend, he is ineligible to feature against his parent club as per the loan agreement.
Jordon Ibe has returned to training but is not match fit yet.
Adam Smith is back after missing last game against Stoke City through suspension.
Andrew Surman remains out with a hamstring injury. He is expected to take few more weeks to recover.

Prediction:
Arsenal 3 – 1 Bournemouth, easy game for the home side, it is expected to be a one sided game with Olivier Giroud scoring a brace. The odds for this game goes in the favour of the home side, to learn more about the odds see more price boosts from Coral.