Manchester United look to Hugo Lloris Should De Gea Depart De Gea has been heavily linked with a move to the Bernabeu as they look to replace veteran keeper Iker Casillas.

David De Gea has been heavily linked with a move to the Bernabeu as they look to replace veteran keeper Iker Casillas. 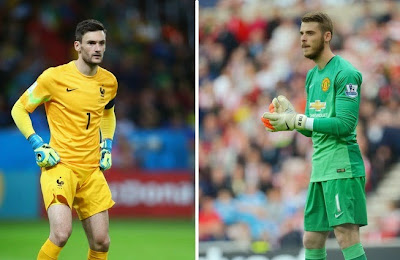 The Spanish goalkeeper has been in the form of his life this season and Louis Van Gaal is determined to keep him in Manchester.

A contract extension is on the table for the Man United number one but it is missing the signature of the 24 year old.

If United do pursue Lloris they will need to fend of French Champions PSG who are also interested in signing the keeper.

Both clubs however will need to table a bid good enough for notoriously tough negotiator Daniel Levy to part with his player.

United have dealt with Levy in the past and know he will try and squeeze ever penny he can out of the club if he is to sell.

Meanwhile, Mauricio Pochettino is determined to keep Lloris at the club as he looks to build stability at the club and the 28 year old is at the centre of his plans.

If United fail to sign Lloris then they could turn their attention to Inter Milan’s keeper Samir Handanovic.

Victor Valdes who signed for the club in January on a free transfer could also be in with a shout of replacing his fellow Spaniard.