Confirmed Arsenal lineups against QPR Arsenal have revealed the lineup for the upcoming Premier League game against Queens Park Rangers.

Arsenal have revealed the lineup for the upcoming Premier League game against Queens Park Rangers. Arsenal face QPR after an impressive performance against Everton last weekend. They won 2 – 0. 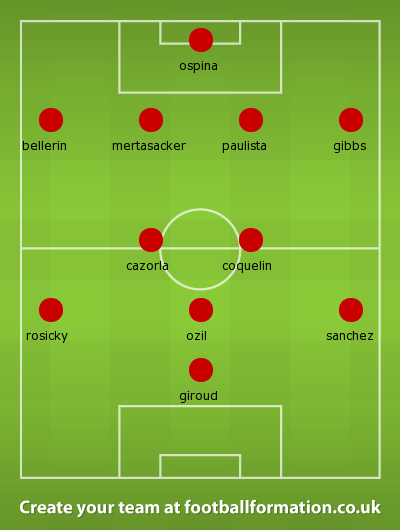 Arsenal boss Arsene Wenger has made few changes to the squad. With Per Mertesacker coming back into the lineup. Wenger starts with the same formation 4-2-3-1.

David Ospina starts once again in goal. Youngster Hector Bellerin starts on the right-back role with Per Mertesacker taking his central role back. Laurent Koscielny is rested with Gabriel Paulista continues after his impressive displays against Everton. Kieren Gibbs takes his left side role in the defence.

Arsenal star midfielder Francis Coquelin starts along with Santi Cazorla once again. Alex Oxlade-Chamberlain is on the bench with Tomas Rosicky coming into his place.
Mesut Ozil keeps his place behind the striker Olivier Giroud. While Chilean attacker Alexis Sanchez starts on the left attacking midfield position once again.

Aaron Ramsey is back from hamstring injury before the expected date and is on the bench for this game. Theo Walcott and Danny Welbeck are likely to feature from the bench.