For the first time probably in decades, Brazil are going into the match in their homeland as the under-dogs. Untimely injury to Neymar and a needless yellow card occupied by the Captain Thiago Silva means Brazil have two match winners out of their squad. Germany on the other hand are going into this match with no fresh injury concerns as stated by Joachim Low and by becoming the 1st ever team to reach 4 consecutive World Cup finals, they will be hoping to do one better this time and what better a stage can be than against the 5 time World Champions.

Both Germany and Brazil got 7 points in their respective group stages, with each attaining a goal difference of +5.

Brazil:
As stated early that Brazil will be without their captain Silva, David Luiz has been handed the captain’s armband for the final before the final. Having scored twice and assisted a goal for the 5 time Champions, David Luiz is in the form of his life in this World Cup. One major concern for Luiz Felipe Scolari might be the form of Dani Alves as the Barcelona man is out of form this World Cup. But given the age benefit he offers as compare to his replacement Maicon, he might get the nod.

Brazil have reached the World Cup Semi-finals 10 times and went on to the finals 7 times.

The last time both of these sides met in a World Cup was way back in 2002 when Brazil beaten the Germans 2-0 in the final to clinch their 5th World Cup medal. Since then both these sides have never met in the World Cup. So the German side will be looking for revenge when they meet their counter parts at the Belo Horizonte. One thing that might disturb the Brazilians is their defense, although they were entitled to be solid on the back, they have conceded 4 goals at the 5 World Cup matches so far and with and with Silva out and Dante in, this might be the problem they have to divert their attention if they want to come out of this match with flying colors.

Last time Brazil were defeated in a competitive match was in last August against Switzerland. Since then they have won 19 and drawn 6 matches.

Germany:
Germany are going into this match probably as favorites and in addition to the weakened Brazilian side, it is their form that has held them high. By scoring 4 goals and creating 2, Thomas Muller will be the spear head of this German attack. But with Mesut Ozil in the flanks along with Toni Kroos in the midfield, this German side has many lethal players like their counter-part Brazilians.

Germany are unbeaten in their last 9 matches winning 6 of them.

However one thing that might concern the German fans is their record against the Brazilians. Both of these sides have met each other 21 times and Brazil have a lion share in wins with 12 while the Germans have a paltry 5. Now maybe they have a chance they might not see coming forward in the short sight and with all guns blazing in the white shirt, they will be looking to dominate their opposition in this match. 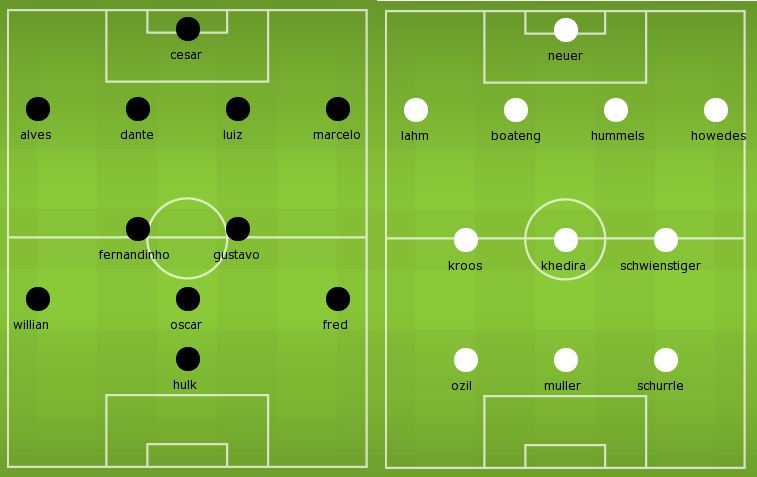