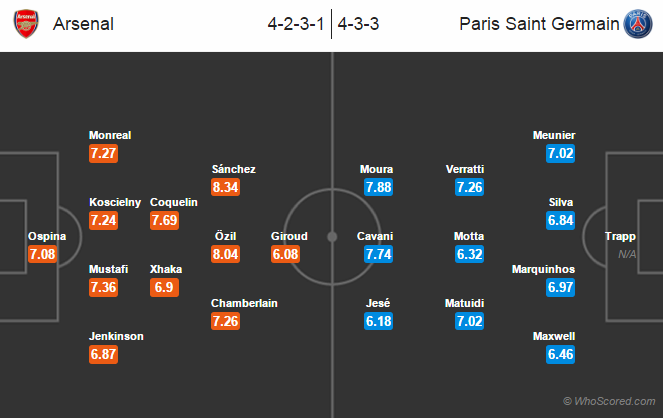 Team News:
Arsenal
Arsenal duo Hector Bellerin has joined the sidelines through injury. They both will miss this game. While long term absentees Per Mertesacker, Danny Welbeck, and Lucas Perez all remain out.
Aaron Ramsey and Theo Walcott are doubtful for this game. Mathieu Debuchy has returned to training but is not match fit.
David Ospina could be getting a starting node. Olivier Giroud may also get a start.
Granit Xhaka and Francis Coquelin are likely to start in midfield.

Paris Saint Germain
Midfielder Adrien Rabiot remains out through injury. Javier Pastore and Angel Di Maria are doubtful for this clash. Di Maria has travelled to London but will still have to pass late fitness test.
Serge Aurier is banned from entering the country so he would be out.

Prediction:
Arsenal 2 – 1 PSG, Arsenal will be looking to keep their top spot in the Champions League Group A. Alexis Sanchez is expected to shine for the home side.