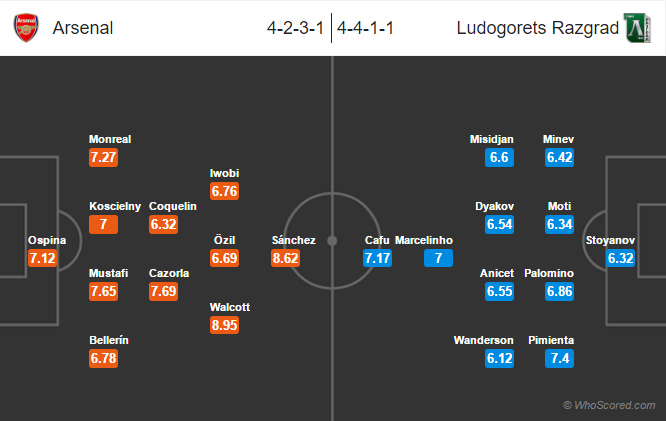 Team News:
Arsenal
Granit Xhaka picked up red card against Swansea City in a Premier League game last weekend but his suspension will not affect his Champions League game.
Stopper David Ospina is expected to come back to the starting eleven.
Francis Coquelin has returned and is ready to return to the lineup.
Olivier Giroud remains a doubt with a toe injury, he has not featured in the last three games.
Aaron Ramsey is back to training but is not match fit, he is expected to miss few more games.
Danny Welbeck, Per Mertesacker and Carl Jenkinson remain out through injury.

Ludogorets Razgrad
The visitors have no player on the sidelines, they have a fully fit squad to choose from. They are likely to bring the same lineup as of their last game.

Prediction:
This game should be an easy one for the home side, my prediction is Arsenal are going to beat Ludogorets Razgrad by three goals to one. Theo Walcott has been exceptional for the Gunners, he is expected to shine once again.