Manchester Unite best lineup after Falcao move. Di Maria, Herrera, Rojo, Blind and Rooney in the lineup but no place for the Dutchman Robin van Persie.

Manchester Untied have come up this summer with big names, they have spent more than £200million on the new faces this transfer window. Louis Van Gaal is still seeking his first win of the Premier League and with these new arrivals, see how he can lineup this squad in a best possible way.


Manchester United have bought World Class players Angel Di Maria from Real Madrid for a fee around £60million and Radamel Falcao on loan from Monaco on the Transfer Deadline Day. These two talents can surely make the difference for United and can help to bring those old glory days for the club.

Alongside these two big names, LVG has also bought Daley Blind from Dutch side Ajax for £15million only, which is one of the best bargain of this summer.

With now Di Maria, Juan Mata, Daley Blind, Ander Herrera for the midfield role and Robin van Persie, Wayne Rooney and Falcao upfront, the Red Devils can do wonders. One thing United fans need right now is PATIENCE, Liverpool supporters are the best example of it. 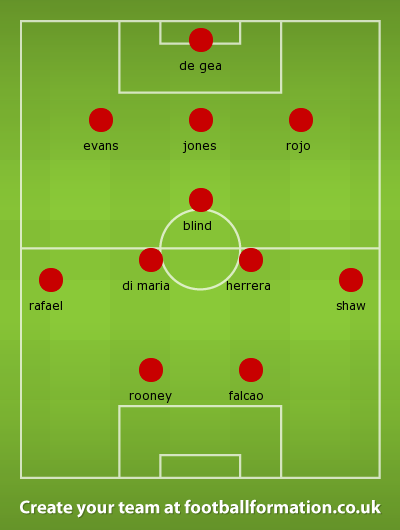 Blind can also play on the left flank which might give other midfielders a chance or might pull Rooney back to give Persie a chance to play alongside Falcao.

Most of the players from this lineup will probably start for the game against Queens Park Rangers on September 24, 2014.

Do you agree with this lineup?
Have your say below.