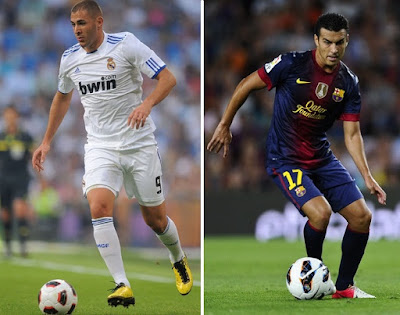 The reports from Spain confirmed that the north London side are keeping close tabs on Real Madrid striker Karim Benzema. With the striker is expected to move this summer Gunners boss Arsene Wenger is hoping to sign his countryman.

Wenger was keen to bring him to Emirates before his move to Madrid from Lyon, however the midfielder preferred a move to the Los Blancos.

Real new boss Rafael Benitez has already planned to play Cristiano Ronaldo as a lone striker next season which clearly indicates that Benzema would not remain an important part of the team.

Meanwhile, Arsenal are preparing a bid for Barcelona attacker Pedro, as per Metro reports. The Spaniard who had a struggling last season at Camp Nou is set to leave the club.

Since the arrival of Luis Suarez from Liverpool last summer Pedro has struggled to get chances. The 27-year-old started only 15 La Liga games last term. However, won the La Liga and Champions League trophy.

Liverpool are also said to be interested in him but the Gunners are likely to secure his deal.