Lineups, News, Stats – Brazil vs Belgium. Brazil will go head to head with Belgium in the quarter final round of World Cup 2018 at Kazan Arena.

Team News:
Brazil
Brazil full-backs Danilo and Marcelo both are doubtful through injury. Marcelo is expected to return after missing last game against Mexico.
Casemiro will miss this game due to suspension meaning Fernandinho will take the role in the midfield.
Roberto Firmino could get a starting node ahead of Gabriel Jesus who has not been performing well so far in this campaign.
Philippe Coutinho and Neymar have to play fairly to avoid getting booking as their one booking away from match suspension.

Belgium
Roberto Martinez has a fully fit squad with no suspension concerns ahead of this big game against Brazil.
Nacer Chadli and Maraoune Fellaini are both eyeing for a start after their great performances in the last game against Japan.
Kevin De Bruyne could get attacking role after his impressive display against Japan.
Vincent Kompany will continue at the defence as he is now fully fit to play.
Thomas Meunier, Jan Vertonghen and De Bruyne are one booking away from a one-match ban. 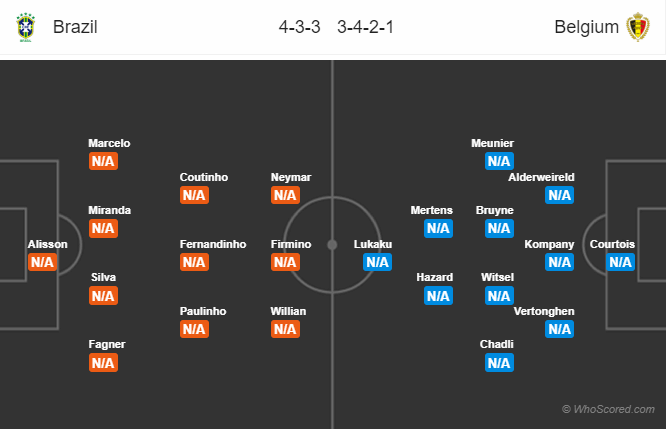 Prediction:
Brazil 2 – 1 Belgium, Coutinho to score again for his country and help them reach the semi finals.