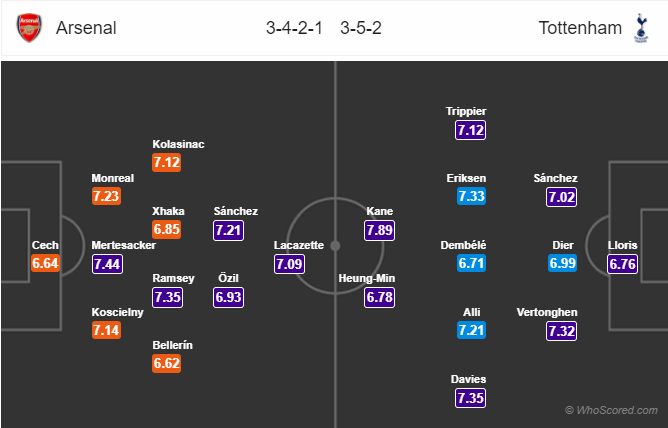 Possible Lineups:
Team News:
Arsenal
Santi Cazorla remains the long term absentee for the Gunners.
Shkodran Mustafi, Olivier Giroud, Rob Holding and David Ospina all remain doubtful through injury ahead of this derby.
Laurent Koscielny is also in doubt with an Achilles issue, he picked up recently while playing for France in the World Cup qualifiers.

Tottenham Hotspur
Mauricio Pochettino will visit Emirates Stadium with several concerns.
Victor Wanyama and Toby Alderweireld both are out through injury. The former has returned to training but is not ready for first team action.
Hugo Lloris and Dele Alli both are doubtful, the boss is hoping to have them back before the match.
Erik Lamela, Harry Winks and Michel Vorm will also be assessed before the game.
Harry Kane is back from a minor knee injury picked up while on international duty.

Predictions:
Arsenal 1 – 1 Tottenham Hotspur, Harry Kane to break the deadlock for the visitors.