Top 5 Turkish Bets for 2017. See all the live apps, exciting and enjoyable. Turkish league is best to enjoy this experience.

Pre-match and live betting are enjoyable and profitable, no doubt about that. But if you have a bit of foresight and prediction skills, you can make your betting experience even more lucrative with long-term and Turkish Super League is one of the best leagues for it. 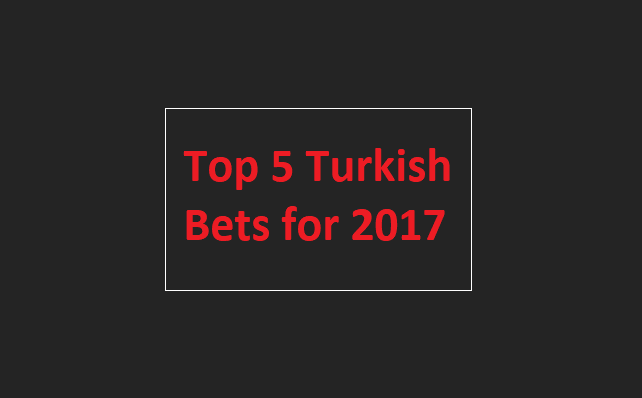 Winner of 2017-18 Season (Superbahis >> Beşiktaş: 2.55, Galatasaray: 2,55)
As you might expect, the most popular long-term betting option is the winner of Turkish Super League. When compared to others, it is easier to predict: after all, this is the ultimate goal for every team, isn’t it? Winner of 2017-18 season is a long-term bet which you can find almost on all of the Turkish bookies. We are almost halfway through the new season, and obviously the two favourites are the defending champions Beşiktaş and Galatasaray. Bookies offer almost even odds for each team, but due to their solid system which survived the test of time, Beşiktaş seems to be a better choice. But, if you want to avoid risks, you can bet to each of them and secure your profit in the end of the season.

Turkish Super League leaders on 31st December 2017 (Bets10 >> Galatasaray: 2.50)
For those who are looking for a quick turnaround time, some bookies offer the half-season bets. Even though we favour Beşiktaş for Winner of 2017-18 season, we have a different idea about this one: Since Beşiktaş’s hand will be full with Champions League and Turkish Super League fixtures; having already eliminated from UEFA Europa League, Galatasaray will have an easier fixture until the end of December and is most likely to lead the league at halfway mark.

Top Scorer (Bets10 >> Bafétimbi Gomis: 4.00)
Turkish Super League has seen an influx of star strikers during the recent seasons and 2017-18 season is no exception. Negredo, Soldado, Vincent Janssen, Valbuena, Vagner Love, Samuel Eto’o, Emmanuel Adebayor, Bafétimbi Gomis and Turkish striker Burak Yılmaz are only some of the stars that will fight for the Top Scorer honours. Having already scored almost in all of his appearances, Galatasaray’s striker Bafétimbi Gomis seems to be a good choice, but you can opt for two more players to mitigate risk.

Top 4 Finish (Justinbet >> Göztepe: 5.90)
Another easy to predict long-term betting option is Top 4 Finish in Turkish Super League. However, to get the most of this one, you should act wisely. For instance, Fenerbahçe who are essentially one of the title contenders, will be an obvious choice, but it won’t make you a fortune and there’s no point to make a long-term investment for such a small amount of return. Rather, you should focus on which team will make it among the Three Giants (Galatasaray, Fenerbahçe and Beşiktaş). In recent years, each season a team emerged as a “joker in the pack” and managed to finish in Top 4 (even in Top 2). This season, it seems likely that Göztepe, the new Super League side, will be the team to watch with their solid squad.


An interesting long-term betting option which is offered by a few bookies only is “Winner without Beşiktaş”. For this particular betting option, back to back champions Beşiktaş is out of equitation and you have less options which makes it easier to predict. To clarify, if Beşiktas wins the league in the end of the season, the bets placed on the 2nd placed team will win. Galatasaray is our favourites to finish in Top 2 besides Beşiktaş.