Will Neymar’s Defection to Paris Tip the Greatest Rivalry in Sports in Favor of Cristiano Ronaldo?

Will Neymar’s Defection to Paris Tip the Greatest Rivalry in Sports in Favor of Cristiano Ronaldo, infographic view of ronaldo vs messi comparasion.

The ink is finally dry on the biggest transfer deal in football history involving 25-year-old whiz kid from Brazil Neymar Jr. The former Barcelona striker invoked a clause in his contract allowing him to buy out the remainder of his deal for 263-million dollars. He then immediately signed a new deal making him the new superstar of Paris Saint-Germain (PSG) a football club where Neymar is expected to be the focal point of the offense. The new team is expected to be centered around him and his incredible skills, taking him out of the shadows cast by playing with the world’s best player, Lionel Messi. Though the deal is likely a great opportunity for Neymar, it has brought up an interesting debate. Some have said Neymar’s leaving Barcelona may tip the scales in the greatest football rivalry of our time between Lionel Messi and Cristiano Ronaldo. 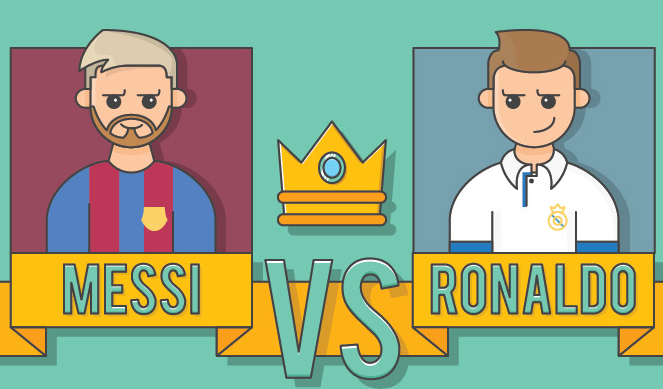 Messi and Ronaldo have been the topic of an ongoing debate for the better part of a decade as to who is the best football player in the sport, which has inspired this list of interesting facts from betting-sites. Lionel Messi has won more FIFA player of the year titles, 5-3 compared to Ronaldo, and has won more team trophies, scored more goals and has more assists as well. That being said, the numbers are extremely close, and as Messi has generally been on the better team made up with stronger players, the scale has remained tipped ever so slightly in his favor.

With Neymar’s departure, Barcelona is losing a key offensive asset and opposing defenses will be able to zone in much more efficiently on Messi. This, coupled with Messi losing his number 1 target for assists last season, and the debate has a new fire to renew its discussion.

Real Madrid star Cristiano Ronaldo is a great player and his personal numbers, at times, have been affected due to poor team performance. Messi, on the other hand, has been part of, what most consider, being the greatest offense in football history; teaming Messi with Neymar and Suarez. This offensive trio has been a force for Barcelona that has won endless trophies and broken record after record.

Throughout this period, Ronaldo has been able to, at the very least, stay competitive. A closer look at the numbers shows that Ronaldo, without much help, has kept pace with Messi in most key stats.

Messi scores, on average, every 100m 18s in gameplay, and Ronaldo trails at a goal every 114m 28s on average. With much more defensive pressure on Messi this season, it will be interesting to see if Messi can maintain the lead in this stats.

When it comes to assists, there is an even bigger discrepancy in statistics. Messi gives an assist every 244m 16s, while Ronaldo only sets up a goal every 335m 37s. With the departure of Neymar, this number will surely come down for Messi, as Neymar was a very prolific striker and a go-to target when defenses would pay him too much attention.

As Ronaldo is younger and will likely play at least a few extra years compared to Messi, there is a strong possibility that he will have a few extra seasons to catch Messi, statistically. Additionally, the fact that Neymar is no longer available to finish Messi’s assists or take pressure off Messi, by opposing defenses, and Cristiano Ronaldo might just be the biggest winner in the Neymar move. The balance of the scales, in the greatest-ever football rivalry, may have just been tipped in his favor. Only time and football will be the judge.