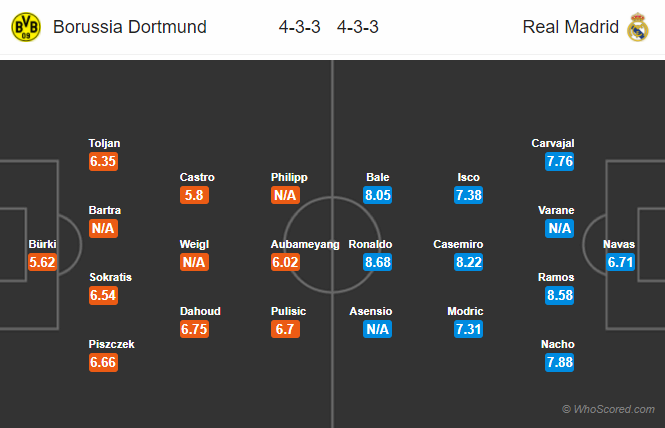 Team News:
Borussia Dortmund
Dortmund will host Real Madrid without six players including stars André Schürrle and Marco Reus as all are out through injury.
Marc Bartra made his first appearance after two weeks last weekend, he is likely to return to the starting lineup inplace of Omer Toprak.
Pierre-Emerick Aubameyang has been of fire, he has netted six goals in three games, he will be eyeing to continue to his goal scoring streak.

Real Madrid
Real Madrid will travel to Germany without several players including Karim Benzema and Marcelo.
Nacho will continue on the left back as both the left-backs Marcelo and Hernandez are out through injury.
Toni Kroos is eyeing to return for this big game, however, he remains a doubt.
Luka Modric was rested in the La Liga game last weekend, he will return to the starting lineup against Dortmund.

Predictions:
Dortmund 1 – 1 Real Madrid, tough game for the visitors. The odds of Dortmund winning the game are quite low, check out free bets for more.