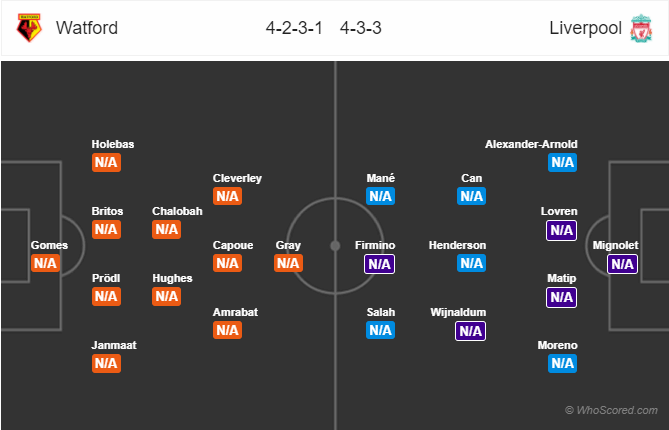 Team News:
Watford
Watford striker Troy Deeney is doubtful through a groin injury, he picked up during the pre-season and is unlikely to make a return this weekend.
Club record signing Andre Gray might get a name in the starting lineup.
Roberto Pereyra missed second half of last season through injury, but he took part in pre-season games, he could get a start here.
Richarlison joined Watford earlier this week, he is also eyeing to make a debut against the Reds.
Mauro Zárate, Christian Kabasele and Brice Dja Djédjé all remain on the sideline through injuries.

Liverpool
Philippe Coutinho missed last few pre-season games due to back injury, also he has been in heavy link with Barcelona, he is a doubt for this game.
Adam Lallana is out for three months through a thigh injury.
Jordan Henderson is lacking match fitness, but the skipper is likely to start.
Daniel Sturridge picked up a minor injury during the pre-season game, he is expected to miss this clash.
Trent Alexander-Arnold is expected to start at the right-back role as Nathaniel Clyne is doubtful through injury.
Alberto Moreno could get a start after exceptional performances in the pre-season.

Predictions:
Watford 0 – 3 Liverpool, an easy game for the visitors.