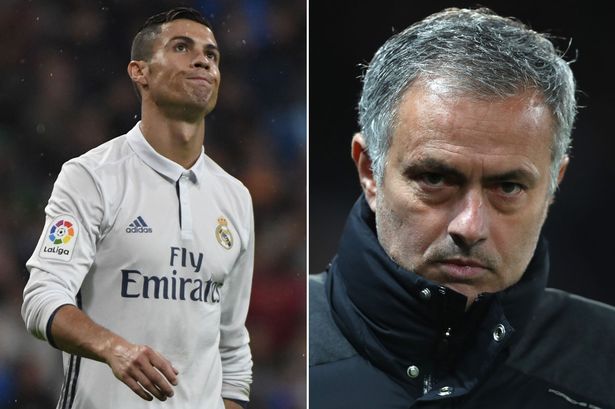 The Portuguese boss has told that bringing Ronaldo back from Real Madrid is nearly impossible.

The reports have linked Ronaldo with a move back to Premier League, Manchester City and Manchester United both have been keeping tabs on him earlier this summer when the reports strongly claimed that Ronaldo is looking for a new club due to tax issues.

Manchester City have also been interested in his move, however the odds were quite low, according to sport betting. They were also reportedly looking to go for Lionel Messi from Barcelona but the Argentine was in no mood to leave the club, he also agreed recently to sign a new deal.

Ronaldo joined Real Madrid for a world record fee around £80million in 2009 from Manchester United.

The Real Madrid star recently claimed that he is happy at Santiago Bernabeu and has no plans to leave this summer.

Mourinho replied when asked about Ronaldo’s return to Man United that it is economic difficulty. The four times Ballon d’Or winner would cost an exceptional transfer fee and it would not be feasible for a club to spend that much cash.

Mourinho was asked after yesterday’s game against LA Galaxy regarding the Portugal captain. The boss replied that he will not going to waste time on players who are mission impossible.

The 32-year-old is still on top of his form, there is no reason for him to leave Real Madrid this summer. He is looking to win third Champions League title in a row in the coming season.

Ronaldo has scored 406 goals in 394 appearances for Real Madrid since his move. He has won two La Liga and three Champions League trophies.

Meanwhile, Alvaro Morata who has also linked with a move to Manchester United is likely to stay at the Spanish side, as per Mourinho. The boss has denied his move also.


With the recent signing of Romelu Lukaku from Everton for £75million, it is unlikely that United will continue targeting Morata for the summer move.