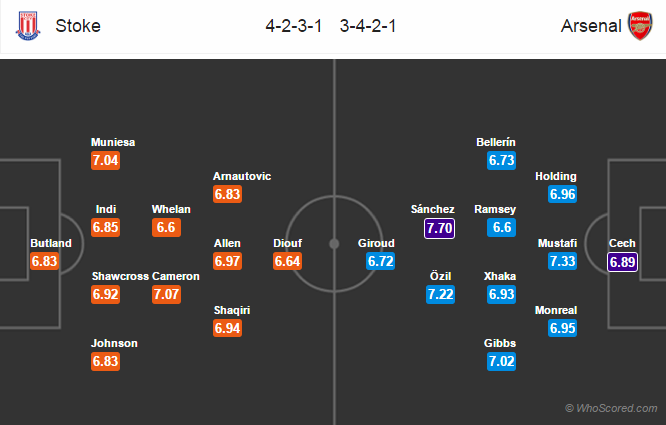 Stoke City
The home side remain without duo Stephen Ireland and Ibrahim Afellay. While the rest squad is fully fit to choose from.
Saido Berahino and Jonathan Walters both returned in last game, they are now likely to take a starting role in the lineup.
Geoff Cameron might keep his place ahead of Charlie Adam in midfield.

Arsenal
Arsenal injury list have now only three players, with two of them could make a return. Alex Oxlade Chamberlain and Laurent Koscielny both are doubtful for this clash. While Santi Cazorla remains out through injury.
Koscielny missed yesterday’s game against Southampton but Shkodran Mustafi took his role at the heart of defence.
Hector Bellerin is likely to start on the wing back role as Chamberlain is a doubt for this game.
Olivier Giroud could start ahead of Danny Welbeck after impressing in the last game.

Prediction:
Stoke 1 – 1 Arsenal, a tough game for the visitors.