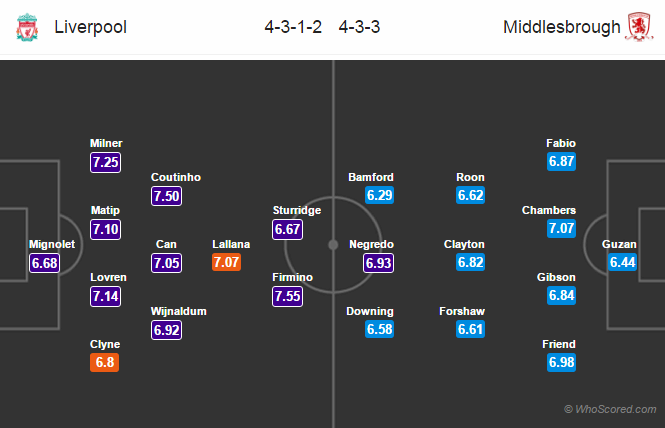 Liverpool
Liverpool boss Jurgen Klopp will start with the strongest lineup as this is a must win game for the Reds.
Jordan Henderson is doubtful and is expected to remain out.
Roberto Firmino who missed the last game through a minor knock is likely to start. He is expected to replace Divock Origi.
Philippe Coutinho could be seen in a deeper role as the boss is likely to start with 4-3-1-2 formation.

Middlesbrough
Middlesbrough have few players out on the sideline through injury. Victor Valdes, Daniel Ayala and Gaston Ramirez are all doubtful.
Patrick Bamford may get another start after impressing in the last game.

Prediction:
Liverpool 3 – 0 Middlesbrough, a must win game for Liverpool if they need a spot in Champions League.
Liverpool likely to dominate the game against the relegated side, Daniel Sturridge and Philippe Coutinho will shine once again.