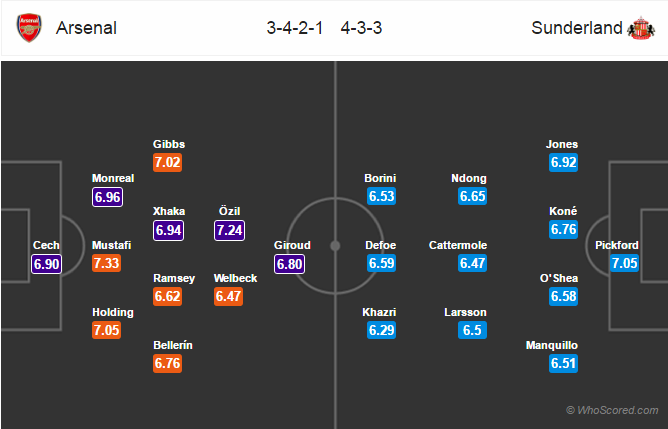 Team News:
Arsenal
Arsenal star player Alexis Sanchez is suffering from a minor groin problem which might keep him out for this game.
Laurent Koscielny and Alex Oxlade Chamberlain are also in doubts, they will be assessed tomorrow.
Santi Cazorla remain the only long term absentee while full-back Kieran Gibbs is likely to feature in this game as he has been declared fully fit.
Danny Welbeck and Olivier Giroud could start together in attack.

Sunderland
The visitors have many players out on the sideline through injury. Victor Anichebe and Jason Denayer both picked injury against Swansea City last weekend.
Steven Pienaar and Lee Cattermole are doubtful. However, boss David Moyes is expecting Cattermole to return.
The Black Cats remain without Duncan Watmore, Bryan Oviedo, Paddy McNair and Jan Kirchhoff due to injury.

Prediction:
Arsenal 2 – 1 Sunderland
Arsenal to dominate the game.
Olivier Giroud to score the opener for the home side.
Jermain Defoe on the scoresheet for the visitors.