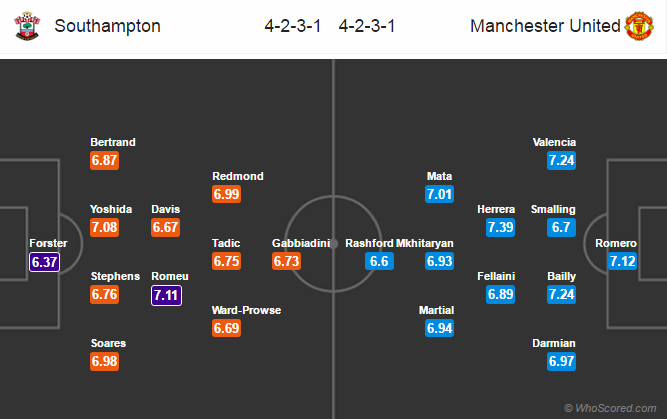 Team News:
Southampton
Southampton are expected to make several changes to the lineup. Charlie Austin will be eyeing for a start after his successful return from the injury.
Matt Targett who has been out since October could feature in this game.
Sofiane Boufal picked up a minor knock against Middlesbrough last weekend, he could be out.
Virgil van Dijk and Alex McCarthy remain out through injury.

Manchester United
Marouane Fellaini returns after missing last three game through suspension, he is likely to take a midfield role.
Paul Pogba could still be unavailable for this game due to his father’s death.
Matteo Darmian is likely to replace Daley Blind on the full-back role. Blind would be rested, according to boss Jose Mourinho.
Sergio Romero and Joel Pereira both will be fighting for the goalkeeper role.
Some of the academy youngsters could get a chance to showcase their skills in the last two games of the league.

Prediction:
Southampton 1 – 1 Manchester United, a tough game for the visitors.