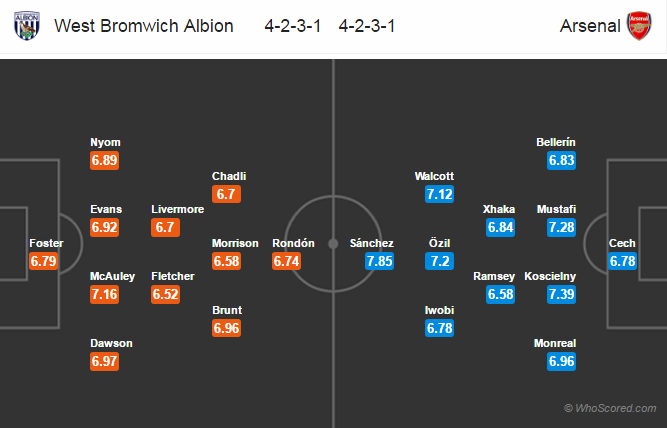 Team News:
West Bromwich Albion
Matt Phillips remains the only injury concern for boss Tony Pulis ahead of this big game against Arsenal.
The boss made some changes in the last game which didn’t prove to be right, he is expected to recall Salomon Rondon and James Morrison back to the lineup.

Arsenal
Danny Welbeck is still struggling with fitness issues, he missed the FA Cup game against Lincoln last weekend through illness. Arsene Wenger is hoping to have him back for this weekend.
David Ospina remains doubtful through injury.
Alex Oxlade-Chamberlain is also in doubts as he picked up a hamstring injury against Lincoln.
Santi Cazorla, Mohamed Elneny and Mathieu Debuchy all remain on the sideline.

Prediction:
West Brom 2 – 1 Arsenal
The home side are likely to give tough time to the struggling visitors.
Alexis Sanchez on the scoresheet for the Gunners.