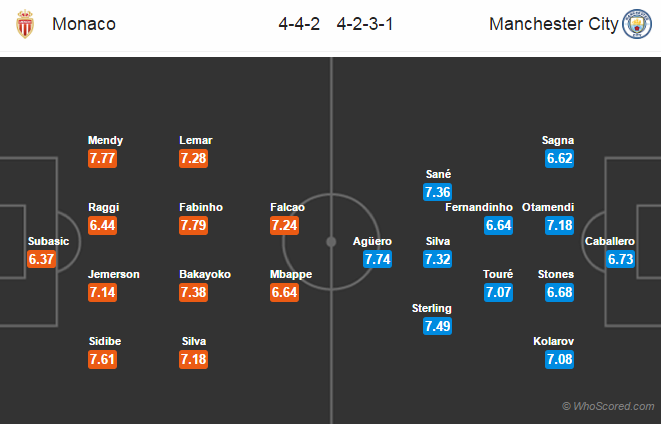 Team News:
Monaco
Monaco will be without Kamil Glik who is suspended for this game, Jemerson is likely to take his place in the lineup.
Boschilia and Guido Carrillo are both confirm to miss this game through injury.
Joao Moutinho is eyeing for a start, he is likely to start from the bench. Tiemoue Bakayoko and Fabinho are likely to keep their place in the starting eleven.

Manchester City
Pep Guardiola remains without trio Gabriel Jesus, Ilkay Gundogan and Vincent Kompany due to injury problems. The latter has returned but is not ready for first team action while the other two remain long term absentees.
Kevin De Bruyne is expected be dropped as the Spanish boss could be planning for a defensive strategy. Yaya Toure and Fernandinho would start in the defensive role if Guardiola starts with 4-2-3-1 formation.

Prediction:
Monaco 2 – 1 Manchester City
The homes side are likely to win the game but unlikely to qualify for the quarter finals.
Radamel Falcao is likely to be on the scoresheet for the home side.