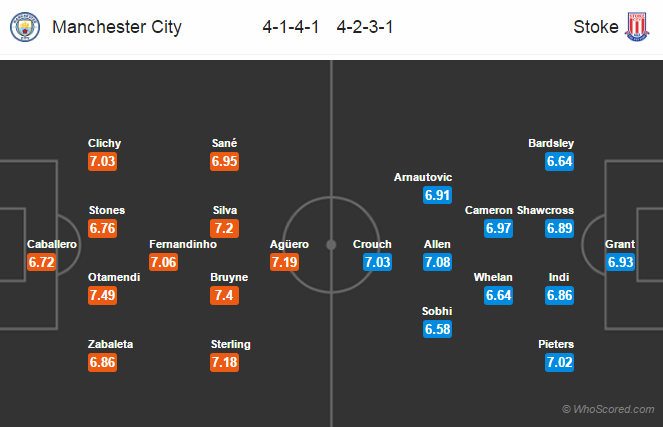 Team News:
Manchester City
Manchester City will recall star Kevin de Bruyne to the starting lineup. He started the last game from the bench.
Nicolas Otamendi could also return after resting out last weekend.
Ilkay Gündogan and Gabriel Jesus both remain on the sideline through injury.
Pablo Zabaleta and Bacary Sagna both are eyeing for a starting role.

Stoke
Stoke City remain without duo Stephen Ireland and Jack Butland.
Xherdan Shaqiri is back after a month from his injury, he may start from the bench.
Glen Johnson could miss this game through a shoulder injury. Phil Bardsley would be replacing the former Liverpool full back.
Jonathan Walters has returned from knee injury after two months, he will be eyeing for a starting role, however Saido Berahino will keep his spot in the lineup which means Walters would start from the bench.

Prediction:
Manchester City 1 – 1 Stoke City, a tough game for the home side.