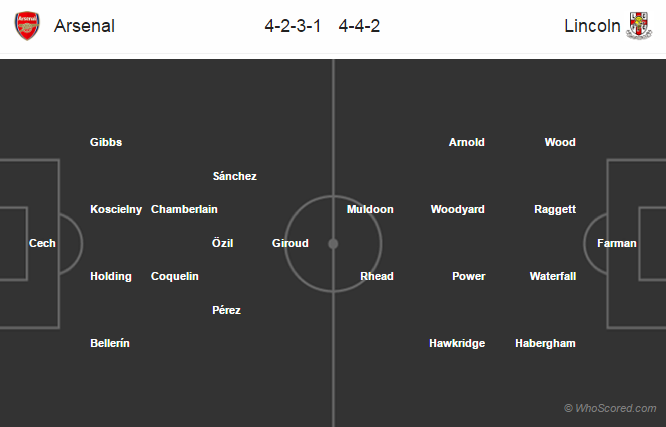 Team News:
Arsenal
Duo Danny Welbeck and Alex Iwobi are doubtful through illness, they missed the Champions League game against Bayern Munich earlier this week.
Mesuz Ozil is back from illness, he is likely to start this game.
Laurent Koscielny picked up a red card against Bayern Munich but he is eligible to play in this competition.
Santi Cazorla, Mathieu Debuchy and Mohamed Elneny remain on the sideline through injury.
Arsene Wenger will be eyeing for a big margin win as the Gunners have been in poor form in the last few games.

Lincoln
Lincoln have no concerns ahead of his clash, they have a fully fit squad to choose from.
The lineup is likely to remain the same as of the last games.

Prediction:
Arsenal 3 – 0 Lincoln
Easy game for the home side, they are likely to dominate the game and will easily be scoring more than two goals.