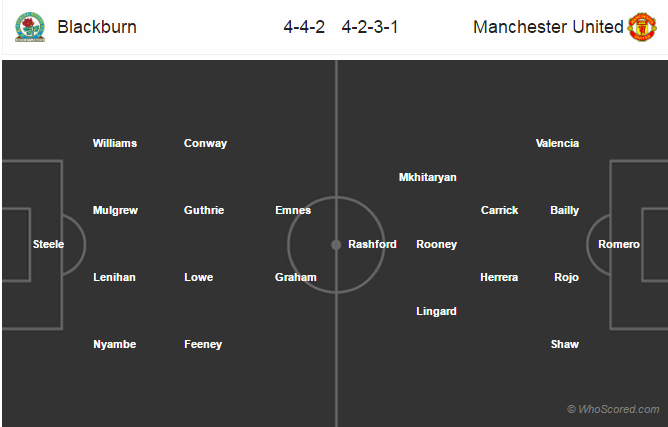 Team News:
Blackburn Rovers
Blackburn Rovers will be without several players for this game. Elliott Ward, Adam Henley, Corry Evans and Tommie Hoban are out through injuries, while Hope Akpan is suspended after being sent off in the last game.
Lucas Joao who missed last game is likely to be back in action.
Sam Gallagher and Gordon Greer are both doubtful for this game.

Manchester United
Manchester United boss Jose Mourinho is expected to give rest to several of star players.
Henrikh Mkhitaryan is back in training but is not ready for first team action.
Englishmen Wayne Rooney, Phil Jones and Michael Carrick all remain doubtful through minor injuries.
Ander Herrera and Eric Bailly both are suspended for the second leg of Europa League, they could be starting today.
Goalkeeper Sergio Romero to keep his place in the starting eleven.
Axel Tuanzebe who was debuted in the last round could get few more minutes to impress the boss.

Prediction:
Blackburn Rovers 1 – 1 Manchester United
The home side are likely to score the opener.
Wayne Rooney to score the equaliser for the visitors.