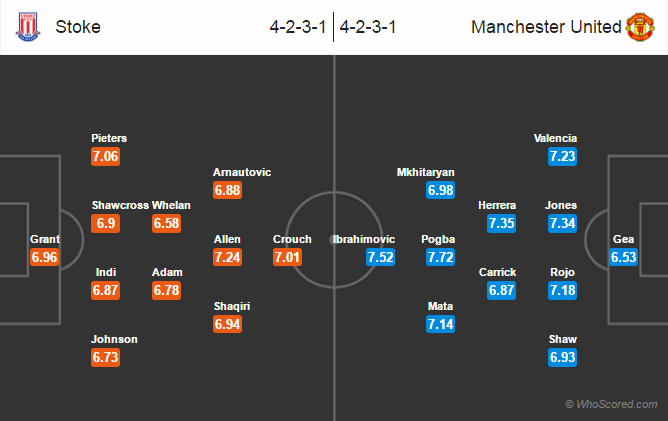 Team News:
Stoke City
Stoke City remain without trio Mame Biram Diouf, Wilfried Bony and Ramadan Sobhi, all are at Africa Cup of Nations.
Jonathan Walters is out with a knee problem which may give Peter Crouch a starting berth.
Bojan is back in training and is likely to feature in this game.
Jack Butland and Stephen Ireland both remain on the sideline.

Manchester United
Manchester United boss Jose Mourinho has a fully fit squad to choose from.
Only Eric Bailly is out as he is currently with Ivory Coast squad for the Africa Cup of Nations.
Juan Mata has impressed in the recent games, he might get a name in the starting eleven.
Matteo Darmian likely to keep his place at left back despite of average performance.
Luke Shaw is not fit for first team action.

Stats:
Manchester United have won two of their last six games against Stoke City.
Man United are unbeaten in their last 12 Premier League games.
Stoke City have netted more than a goal in their last three games.


Stoke likely to concede in the opening quarter.