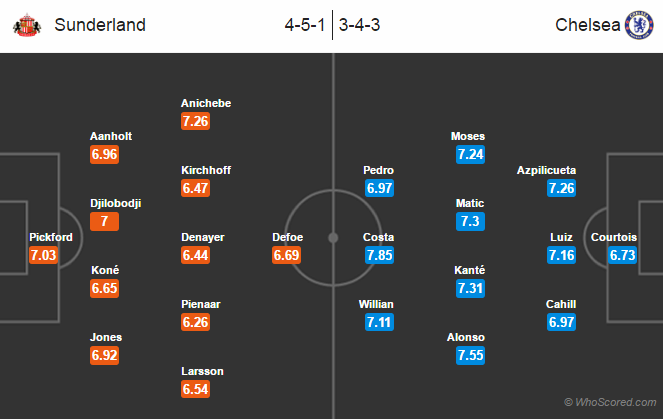 Team News:
Sunderland
Sunderland will be without several players tonight. Duncan Watmore, Lee Cattermole, Paddy McNair and Jack Rodwell are all out through injury.
Didier Ndong is suspended for this game after receiving his fifth yellow card last weekend.
Fabio Borini could start against his former side despite of not featuring in any of the game for the past several months.


Chelsea
Chelsea duo stars John Terry and Eden Hazard remain on the sidelines through injury. The latter is expected to be replaced by Willian.
John Obi Mikel is doubtful for this game through injury.
Kurt Zouma, Marco van Ginkel and Oscar all have returned to training but are not match fit.
Antonio Conte is likely to bring some changes to the lineup due to tough schedule. Cesc Fabregas could get a start.

Prediction:
Sunderland 1 – 1 Chelsea, a surprise result for the visitors.