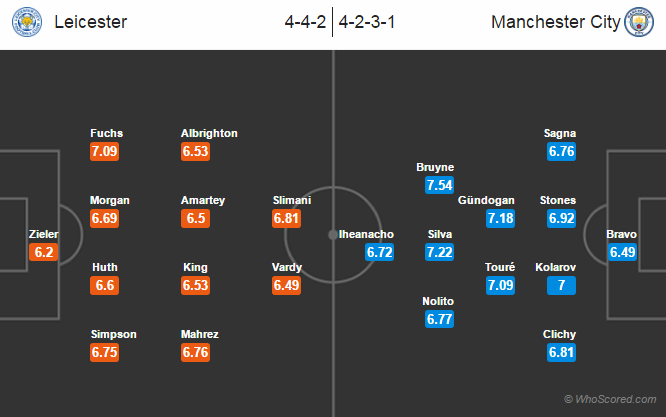 Leicester City
Claudio Ranieri will be bringing back several players to the lineup after resting them out in the Champions League last group game against Porto earlier this week.
Danny Drinkwater is back from three match suspension.
Andy King and Daniel Amartey are likely to start, whereas Nampalys Mendy is expected to start from the bench.
Kasper Schmeichel has been out through injury for the past several weeks, he is hoping for a return today.

Manchester City
Sergio Aguero is unavailable through suspension following his tackle on David Luiz against Chelsea last weekend. He is suspended for four games. Kelechi Iheanacho is expected to start in place of him.
Fernandinho is also banned for three games, Yaya Toure and Ilkay Gündogan both would be fighting to get the starting node.
Nicolas Otamendi is suspended for this game only, as he received his fifth yellow card of the season last weekend.
Raheem Sterling remains doubtful for this game. While Fabian Delph is yet to regain his fitness.
Vincent Kompany remains out through injury.

Prediction:
Leicester City 1 – 1 Manchester City, the home side will luckily get a point.