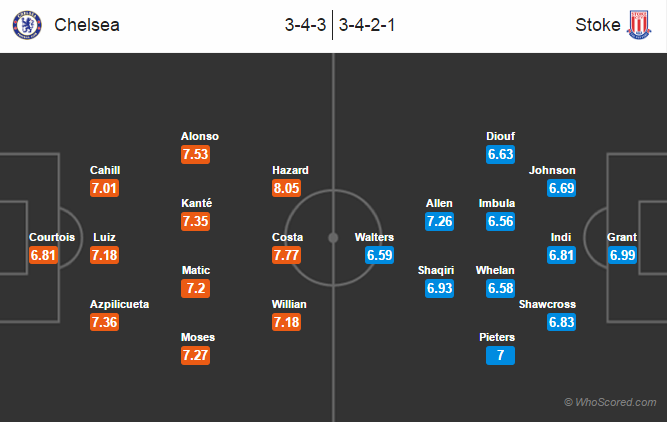 Team News:
Chelsea
Skipper John Terry remains out for the league leaders.
Diego Costa and N'Golo Kante are back from suspension. Both missed the last game against Bournemouth.
Pedro is suspended for this game.
Marco van Ginkel and John Obi Mikel are doubtful for this clash.

Stoke City
Marko Arnautovic will miss out once again through suspension, this will be his final suspension.
Ibrahim Afellay returned against Liverpool earlier this week, he is expected to start.
Xherdan Shaqiri will be eyeing for a start. While Bojan might start from the bench.
Stephen Ireland, Phil Bardsley, Geoff Cameron and Jack Butland are all on the sideline through injury.

Prediction:
Chelsea 1 – 1 Stoke City
Chelsea to dominate possession.
Stoke to have a lucky breakthrough in the start.
Diego Costa to equalize in the second half.