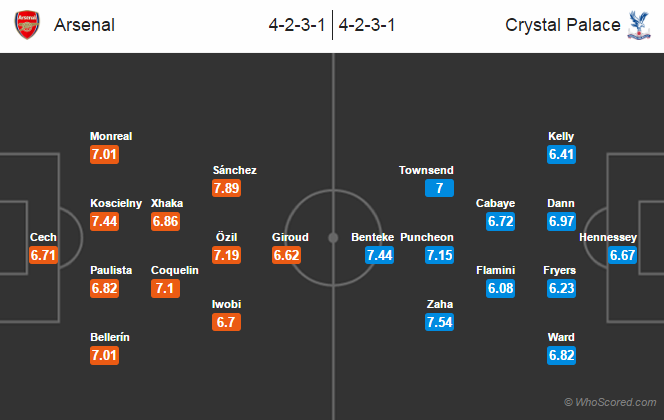 Team News:
Arsenal
Arsene Wenger has ten players to concern with ahead of this game.
Santi Cazorla, Mathieu Debuchy and Yaya Sanogo are all confirmed to miss this clash.
Alex Oxlade Chamberlain, Kieran Gibbs and Theo Walcott are all doubtful through injuries.
Skhodran Mustafi is back in training after missing several games for the Gunners, he might be given further time to recover fully.
Chuba Akpom is also back after his long term injury, he is not match fit at the moment.
Aaron Ramsey is fully fit and could be featuring in this game.
Olivier Giroud may keep his place in the starting eleven after impressive game against West Brom on Monday.

Crystal Palace
New manager Sam Allardyce will be having several problems ahead of this game. Damien Delaney is out through suspension. Ezekiel Fryers is expected to fill his place.
While James Tomkins and Pape Souare are out through injury.
Joe Ledley and James McArthur are both doubtful for this game.
Loic Remy has returned to training but is not ready for first team action.

Prediction:
Arsenal 3 – 1 Crystal Palace, easy game for the home side.
Alexis Sanchez to score to opener.
Arsenal will dominate the game.


Palace will score a goal on set piece.