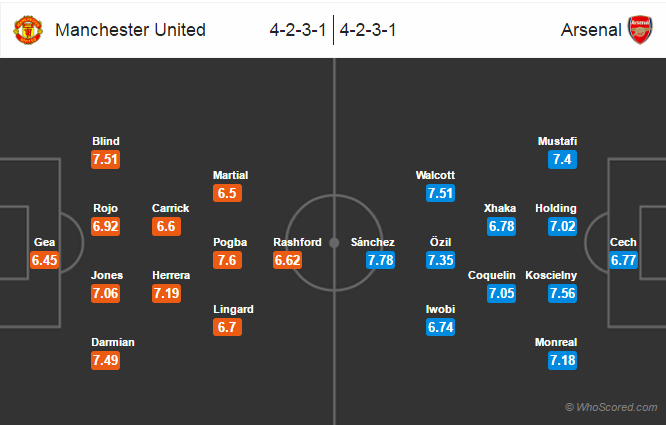 Team News:
Manchester United
Manager Jose Mourinho has to deal with several injuries ahead of this game. Eric Bailly, Antonio Valencia and Chris Smalling are all out through injury.

Zlatan Ibrahimovic will be missing this important game through suspension, he picked up the fifth yellow card of the season in the last game.

Wayne Rooney is doubtful for this game through a knee injury. Marcus Rashford or Anthony Martial will fight for the striking role.

Luke Shaw is expected to be rested despite of his return, Daley Blind will start on the left side with Phil Jones and Marcos Rojo at the heart of defence.

Arsenal
Arsenal boss Arsene Wenger will remain without six players for this game. Hector Bellerin and Santi Cazorla both have recently joined the long term absentees Per Mertesacker, Danny Welbeck and Chuba Akpom

Carl Jenkinson might have a chance on the right-back role.

Alexis Sanchez who picked up a minor injury is doubtful. He played the last game for Chile against Uruguay but is yet to recover fully. Olivier Giroud is in line to have a starting birth.

Prediction:
Manchester United 1 – 1 Arsenal, a tough and entertaining game. Alexis Sanchez to score for the visitors.