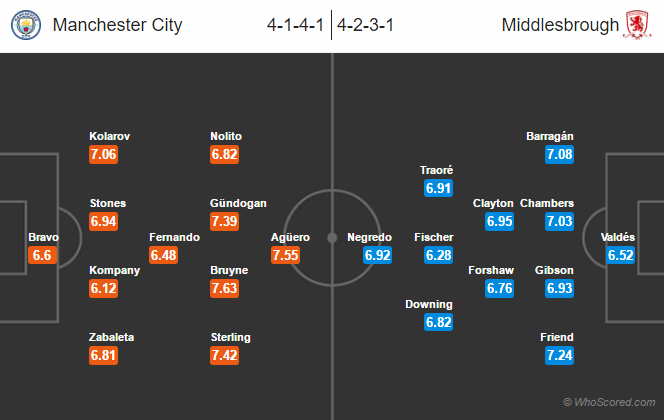 Team News:
Manchester City
The home side are coming from a great victory against Barcelona in Champions League. Boss Pep Guardiola could be brining a minor change in the squad.
Claudio Bravo who missed the game due to suspension is back.
Fernandinho has joined Fabian Delph and Bacary Sagna on the sidelines.
Vincent Kompany who was on the bench against Barca is expected to return to the lineup.

Middlesbrough
The visitors will be without Gaston Ramirez who is suspended for this game after picking up his fifth yellow card of the season.
James Husband, Daniel Ayala, Marten de Roon and Cristhian Stuani are all doubtful through injuries.
Manager Aitor Karanka is expected to start with the similar lineup as of last weekend.

Prediction:
Manchester City 2 – 2 Middlesbrough, the visitors are likely to surprise the home side with an amazing display of football.