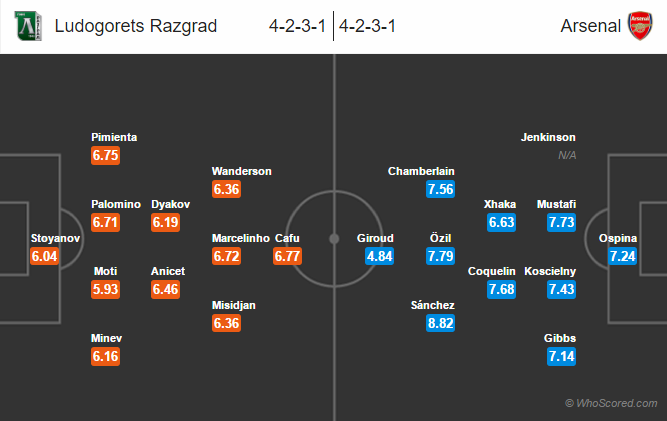 Team News:
Ludogorets Razgrad
The home side have once again a fully fit squad to choose from, they are likely to start with the same lineup as of last game against Arsenal.

Arsenal
Arsenal boss Arsene Wenger will remain without Theo Walcott who is out with an injury, he missed the last game against Sunderland.
Santi Cazorla, Per Mertesacker, Lucas Perez and Danny Welbeck all remain on the sidelines through injury problems.
Nacho Monreal and Hector Bellerin both were dropped out of the squad. Kieran Gibbs and Carl Jenkinson are expected to have a chance.

Stats:
Ludogorets Razgrad have not won any of their Champions League group game so far this season.
Arsenal are unbeaten in their last three Champions League games.
This will be the second meeting between these sides, first was won by Arsenal few weeks ago.

Prediction:
Both the sides are coming from a fine run in their domestic campaigns. The home side are well aware of Arsenal and they will try to get atleast a point tonight.
Ludogorets Razgrad 1 – 4 Arsenal, the away side are likely to trash with a big margin, Alexis Sanchez and Mesut Ozil to score for the visitors.