Spanish Club's second most sensational match is about to kick off within 24 hours between two fierce rivals; defending Champions League winner Real Madrid and runner up Atletico Madrid. There have been 213 matches played between these two sides and Real Madrid has clear dominance with 108 wins while Atletico holds exactly half the number of wins of Real madrid's total wins while for 51 times both sides settled for 1 points that is going for draw. 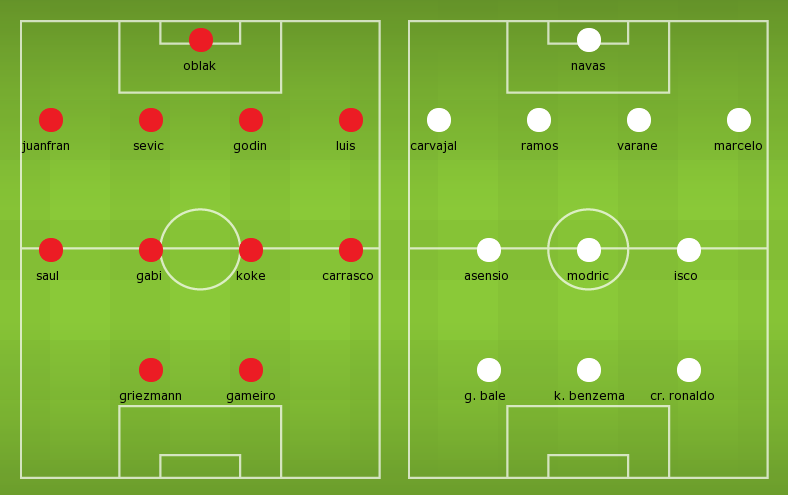 Atletico Madrid
Starting La Liga season pretty bad way by losing 4 points in starting two games  Atletico came back strong to face tough matches. Diego Simeone’s side were happy to go toe-to-toe in an attacking game, although they used to always get back to their typical defensive stream which is deep rooted in their foundation.

Atletico's strength show didn't run long as they lost points in recent matches as well. First, the stubborn Sevilla(away) shocked them with 1-0 and some salt to injury was added when Koke received a red card in closing 15 minutes, and their last match before going into the international break was a thrashing loss to Real Sociedad with 0 -2, where wall of Simeone was breached not once but twice and they didn't score any goal.

Heading wounded into the derby won't help Atletico and we might see some changes in line up against Real and a return to the formula that has served them nicely in derbies. Where they use to build defensive wall with close gaps, breaking attack of opponents in mid field and initiating highly decisive attacks.

Atletico is heading with their own brute forces of Fernando Torres, newly signed and highly shining Kevin Gameiro, Juanfran, Diego Godin, Filipe Luis and Carrasco, while Grizman is expected to be fit to play.

Real Madrid
There are some good news for Real Madrid heading into this match with the force of their key players Luka Modric in midfield and UEFA's best defender Sergio Ramos who were out for about a month due to injury while another blow is the missing of famously called German Sniper i.e. Toni Kroos holding 90%+ pass accuracy and most assists for Real Madrid.

Due to recent, not upto the par, performance of Real's star Cristiano Ronaldo, Zidane has plans to play him at other than his favourite striker role and this can only be confirmed, if happened, when they will hit the pitch tomorrow.

Zidane and his Co. are heading into this table leader deciding match with their unbeatable streak in last 21 matches, so Zidane has great responsibility to make sure to play his best men tomorrow and use his rotating strategy with great tactics to keep the winning streak go on inorder to keep first position secured which is only 2 points plus than their arch rivals Barcelona.

Prediction
Atletico Madrid 1 - 3 Real Madrid, Gareth Bale to shine for the away side.

Columnist: M Faisal Hyder, a Real Madrid fans, he loves to write about the Spanish giants. See all his articles