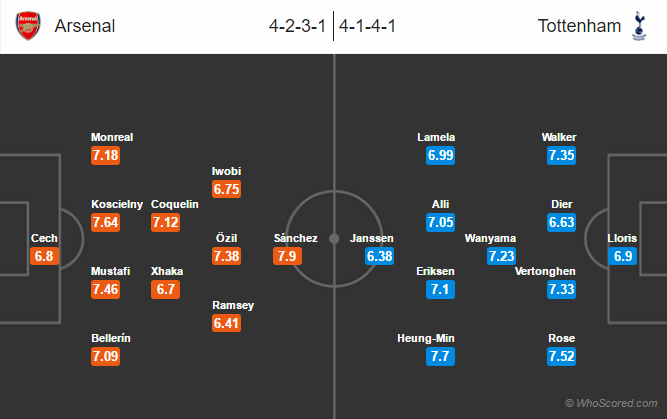 Team News:
Arsenal
Arsenal boss Arsene Wenger have several concerns ahead of the Premier League derby game this weekend.
Lucas Perez, Per Mertesacker and Danny Welbeck are all out through injuries.
Hector Bellerin, Theo Walcott, Nacho Monreal, Kieran Gibbs and Santi Cazorla are all doubtful. Duo full-backs Bellerin and Monreal are expected to return.
Aaron Ramsey is likely to keep his place in the starting eleven.
Granit Xhaka could also be seen in the lineup after missing out last games due to suspension.

Tottenham
Spurs remain without Moussa Sissoko who is going to server his final match suspension.
Toby Alderweireld, Erik Lamela, Mousa Dembele and Harry Kane are all doubtful for this game.
Vincent Janssen is likely to lead the front line, Kane is expected to start from the bench.
Danny Rose is expected to return to the lineup after resting in the last game against Bayer Leverkusen.

Prediction:
Arsenal 2 – 2 Spurs, the visitors are likely to remain unbeaten despite of the fact that Gunners are amazing this season. This will be a great, tough and entertaining game.