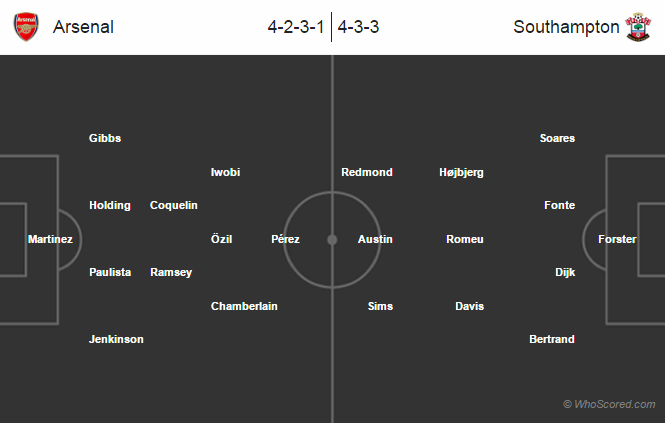 Team News:
Arsenal
Arsenal boss Arsene Wenger will be rotating several players in the starting lineup.
Mathieu Debuchy who recently got back from his injury suffered in the weekend’s game against Bournemouth. Carl Jenkinson is expected to take his place.
Emiliano Martinez may continue to start in goal in the League Cup.
Hector Bellerin, Per Mertesacker, Santi Cazorla and Danny Welbeck all remain on the sidelines through injury.
Olivier Giroud is doubtful with a minor hamstring injury. Lucas Perez has returned and could be getting a starting birth.
Alexis Sanchez and Theo Walcott are expected to be rested, meaning youngsters Alex Iwobi or Jeff Reine-Adelaide will return to action.

Southampton
The visitors are also having several injury problems. Five players are confirmed to miss this game while three players are doubtful through fitness issues.
Star player Dusan Tadic remains out with a nose injury.
Teenage sensation Josh Sims may continue on the left side of attack after impress performances in the recent game.
Manager Claude Puel is expected to start with a strong lineup.

Stats:
Southampton have won three of their last six games against Arsenal in all campaigns.
The last time they met in the League Cup was in 2014, Southampton won the game by two goals to one.
Only one game out of the last six ended as a goalless draw.

Prediction:
Arsenal 1 – 1 Southampton, the visitors are going to win the game on penalties.