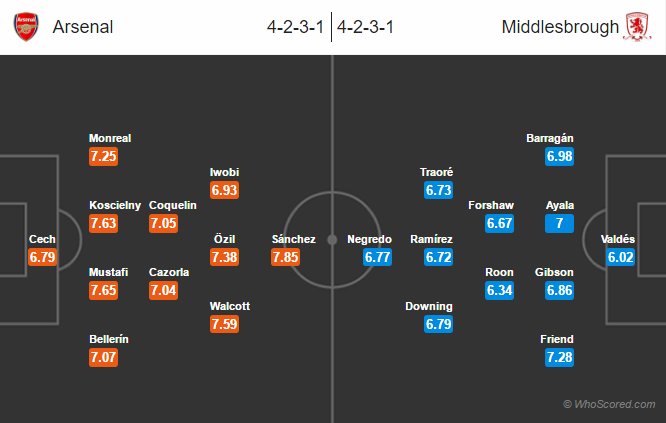 Team News:
Arsenal
Arsene Wenger remains without several players once again. Per Mertesacker and Danny Welbeck remain the long term absentees.
Chuba Akpom is also out through injury which he suffered recently.
Francis Coquelin is likely to start inplace of Granit Xhaka who is suspended for this game.
Carl Jenkinson and Aaron Ramsey both have returned to training but are not ready for the match.

Middlesbrough
The visitors will be without few players for this game. Grant Leadbitter is out through an injury. James Husband and Fabio are doubtful through injuries, however, they could make a comeback.
Calum Chambers is ineligible to play against his parent side.
Adama Traore and Daniel Ayala are likely to get a name in the starting lineup.

Prediction:
Arsenal 2 – 1 Middlesbrough, the Gunners have been in great form, Theo Walcott, Alexis Sanchez and Mesut Ozil have put incredible performances in the recent games. The trio is expected to shine again.