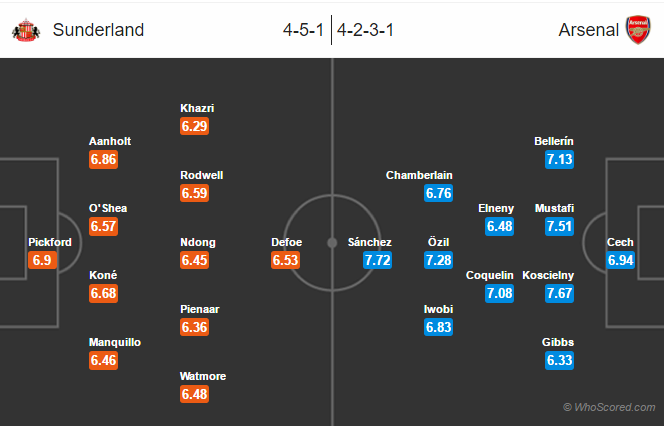 Team News:
Sunderland
Sunderland have several players on the sidelines through injury including Fabio Borini, Sebastian Larsson, Vito Mannone and Adnan Januzaj.
David Moyes side are coming from a League Cup defeat against Southampton earlier this
Jermain Defoe and John O'Shea are expected to return to the starting lineup after missing last game.

Arsenal
Arsenal remain without several players, Granit Xhaka is still serving his suspension.
Santi Cazorla is out with a heel injury, he might make a return.
Chuba Akpom has joined long term absentees Per Mertesacker and Danny Welbeck on the sidelines.
Lucas Perez has been ruled out for six weeks with an ankle injury.
Aaron Ramsey is expected to take some part.
Alex Oxlade-Chamberlain was superb against Reading in the League Cup game, he could be getting a starting node.

Prediction:
Sunderland 1 – 3 Arsenal, Theo Walcott to score a brace for the visitors.