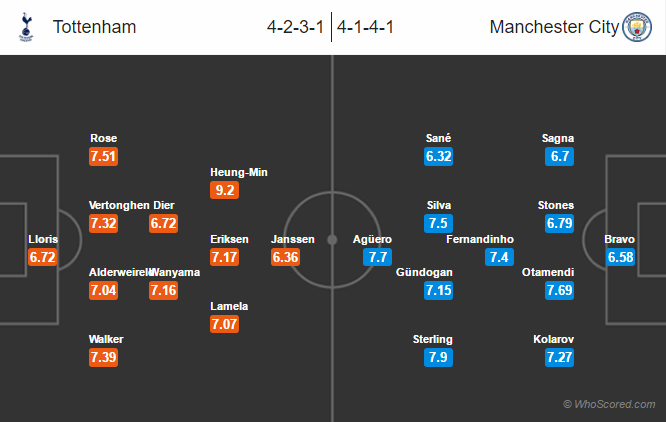 Team News:
Tottenham
Tottenham only concern for this game is striker Harry Kane who is out through an ankle injury.
Moussa Sissoko, Danny Rose, Mousa Dembele and Eric Dier all were rested in the Champions League game, they are likely to return to the squad.
Vincent Janssen will continue to start upfront in the absence of Kane.

Manchester City
The visitors will be without few players including striker Nolito who is out through suspension. Kevin de Bruyne is also out with a hamstring problem, Vincent Kompany also remains on the sidelines. While Fabian Delph remain doubtful for this clash.
Leroy Sane and Jesus Navas are fighting to be Bruyne's replacement.
Bacary Sagna and John Stones are expected to return after resting in a Champions League game against Celtic earlier this week.

Prediction:
Tottenham 2 – 2 Manchester City, both the sides are likely to remain unbeaten but would lose two vital points. Sergio Aguero to score for the visitors.