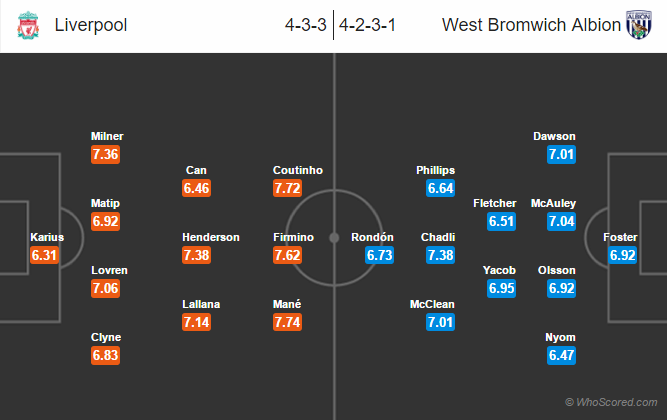 Team News:
Liverpool
Liverpool boss Jurgen Klopp has several players are out ahead of this game, Sheyi Ojo is out through injury, Joseph Gomez is not match fit and Mamadou Sakho out with unknown reasons.
James Milner is having a minor injury but is expected to be back.
Georginio Wijnaldum is back from hamstring injury after missing last game against Manchester United.
Adam Lallana will return to the starting eleven at the cost of  Daniel Sturridge who failed to perform against Man United.

West Bromwich Albion
West Brom will only be without Jonny Evans who is suspended for this game after receiving five bookings in starting eight league games.
Chris Brunt is likely to start his first game of the season, he featured from the bench against Tottenham last weekend.

Prediction:
Liverpool have been in superb form this season, they are likely to maintain their record against West Brom. My prediction is Liverpool 2 – 0 West Brom, Sadio Mane on the scoresheet.