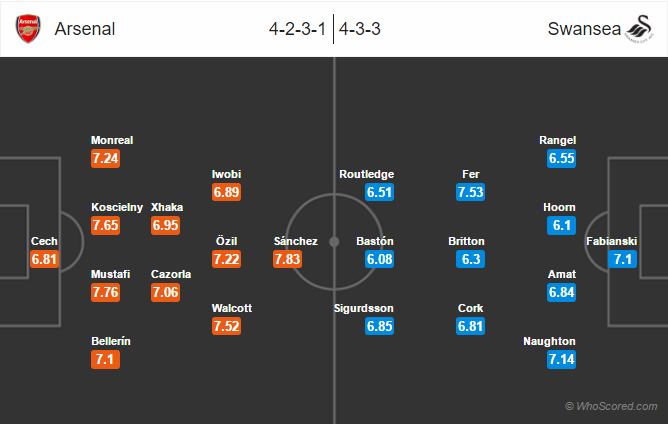 Team News:
Arsenal
German playmaker Mesut Ozil has been declared as fit despite of his replacement at half time against Northern Ireland few days ago.
Hector Bellerin who picked a minor injury while playing for Spain under 21 is fit to feature.
Aaron Ramsey has returned to training but would be out for few more games. Same goes for striker Olivier Giroud who is out with a toe injury.
Francis Coquelin is back and could start from the bench.
Read More in Detail: Arsenal injury updates | Arsenal News

Swansea City
Federico Fernández, Fernando Llorente and Jefferson Montero all remain doubtful for this game.
Swansea manager Bob Bradley is hopeful of Llorente’s return.
Nathan Dyer is out for six to eight weeks due to an ankle problem.

Get the latest football updates! Get FootyFeedy!

Prediction:
Arsenal are going great so far this season, currently on third spot, this is a must win game else they could lose their spot easily. Arsenal 2 – 1 Swansea City, Alexis Sanchez to shine for the home side.