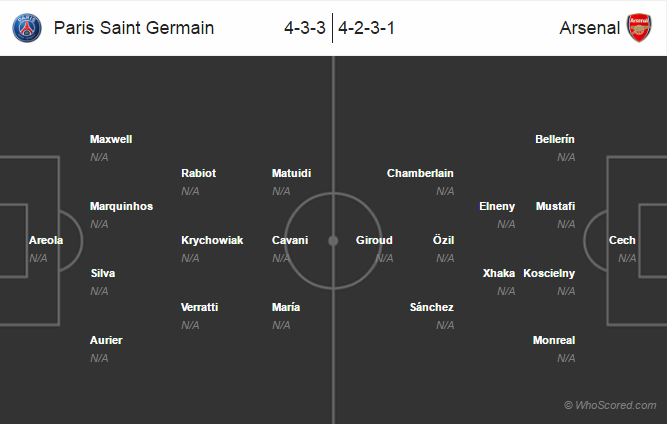 Paris Saint Germain
Home side will be without Layvin Kurzawa who picked up an injury in the last game against Saint Etienne on Friday. Maxwell is likely to take his place in the starting eleven.
Boss Unai Emery has dropped Hatem Ben Arfa from the squad.
Javier Pastore and Serge Aurier both are back and likely to feature.
Thiago Silva is doubtful through injury.
Angel Di Maria and Edinson Cavani both started from bench in the last league game, they are likely to come back to the starting eleven.

Now its easy way to keep updated from all the footy action, Learn More!

Arsenal
Arsenal boss Arsene Wenger will remain without Per Mertesacker, Danny Welbeck and Gabriel Paulista.
Aaron Ramsey and Laurient Koscienly both returned to training yesterday but the latter one is declared as fit.
Granit Xhaka, Mesut Ozil, Mohamed Elneny, Alexis Sanchez and Olivier Giroud all are likely to feature in this game.
Head to Head:
This will be the second meeting between these two sides, Arsenal won the first.