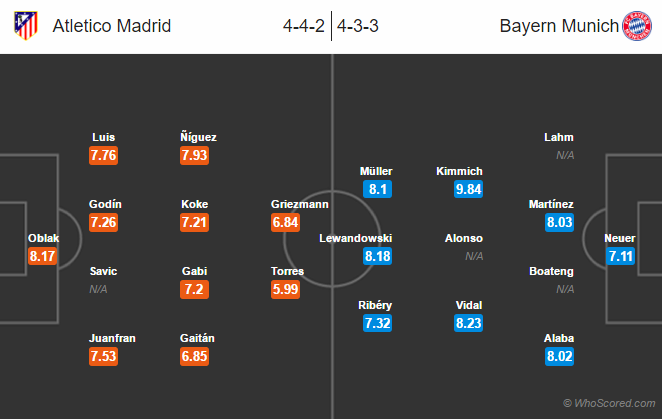 Team News:
Atletico Madrid
Atletico Madrid boss Diego Simeone starts once again without several players Moyá, Alessio Cerci, Tiago, Augusto Fernández and Giménez.
Gabi and Kevin Gameiro both are likely to return to the lineup.
Fernando Torres is expected to start this game, as per the boss.
Saul Niguez and Stevan Savic both were rested last weekend for this game, now they are likely to take their roles.
Yannick Carrasco or Nico Gaitan will take the wing role inplace of injured Giménez.

Bayern Munich
Jerome Boateng and Arjen Robben both returns from injury, they are likely to feature in this game.
Carlo Ancelotti still doubtful over center-back Mats Hummels’ fitness.
Arturo Vidal, Xabi Alonso and Franck Ribery all were rested in the last Bundesliga game, they all will return to the lineup.
Joshua Kimmich impressive performance could give him another spot in the lineup.

Prediction:
Atletico Madrid 1 – 1 Bayern Munich, likely to be one of the exciting game of this group.