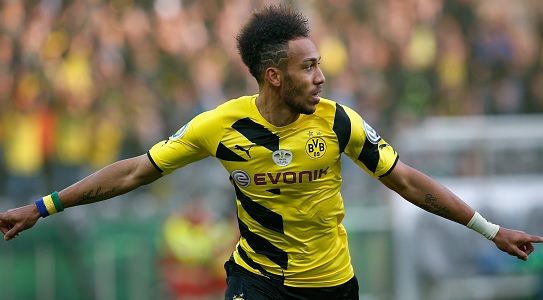 The Gunners recently made a £40million bid for the German League star player but the recent reports claimed that the North London side have failed to seal the deal.

Aubemayang has clearly denies the move to the Gunners despite of having a good offer.

Dortmund CEO Hans-Joachim Watzke also told: “I can rule out transfer of any of our top performers now. That's definitely not on our agenda.”

Arsenal manager Arsene Wenger is now eyeing Paris Saint Germain striker Edinson Cavani and could be planning to make a bid. Metro claimed that Arsenal are now planning to sign Cavani as they look to bolster their Premier League chances.

On the other hand, Arsenal are also keeping tabs on long term target Jackson Martinez, according to Daily Star.

The 29-year-old is currently out of favour at Atletico Madrid and is set to be sold, as boss Diego Simeone is preparing to sign new strikers.

Currently, Arsenal have only Olivier Giroud who has been great so far this season, has netted 12 goals so far in Premier League.

Meanwhile, the Gunners have finally completed the move of Mohamed Elneny, as per Arsenal.com. The Egyptian star was unveiled earlier today.