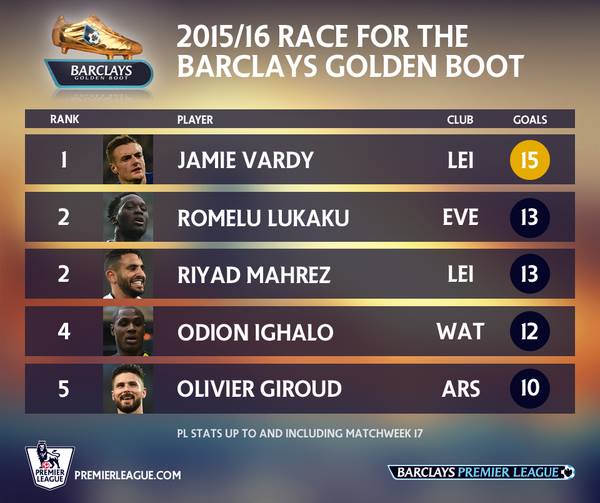 Below are the contenders for the Premier League Golden Boot.

Jamie Vardy
The Leicester City star striker has been exceptional this season. He is performing at the very best time which would give him a direct spot in the England squad for the European Championship. He is currently leading the chart with 15 goals.

Romelu Lukaku
Not a surprise name, the Belgian beast is performing very well for Everton. He has netted 13 goals and is likely to be a star striker for Belgium in the Euro.

Riyad Mahrez
Another surprise name in the list is of Mahrez, another Leicester City who has been in great form not in scoring but also assisting. He has scored 13 and assisted 7 so far.

Odion Ighalo
Watford star striker who netted twice against Liverpool last weekend is also a player who can fight for the Golden Boot. Currently with 12 goals.

Olivier Giroud
The Arsenal striker is hoping to win his first Golden Boot in the Premier League. He has been at Gunners since long but is yet to win any big individual award. He is with 10 goals.

Who will win the Premier League Golden Boot this season?
Have your say below.