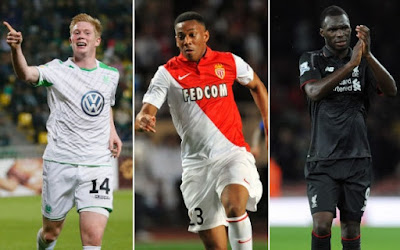 With transfer window now closed, here are the top five big deals that happened in the Premier League.

Kevin De Bruyne
Manchester City made the biggest move of the summer by splashing £54million for former Chelsea attacker Kevin De Bruyne to capture his move from German side Wolfsburg.
De Bruyne who was Europe's top assister last season will be playing with the likes of Sergio Aguero and David Silva at the Etihad Stadium.

Anthony Martial
Manchester United sealed their expensive move of the summer on the deadline day. They signed Anthony Martial from French side Monaco for £36million which became the third most expensive signing in the Premier League.

Nicolas Otamendi
Manchester City also splashed money on a defender. They signed Nicolas Otamendi from Valencia for £32million.
The center-back is competing with Eliaquim Mangala and Vincent Kompany to get a regular role in the starting lineup.