Premier League have always produced some of the World’s dirtiest footballers including Roy Keane and the current one Diego Costa. These players sometimes win matches for the teams with their dirty tricks but it tells that they don’t have a sportsman spirit in them which causes them to do dirty stuff while playing on the pitch. 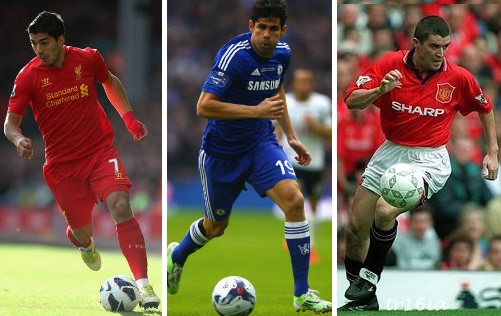 Here are five top dirtiest players who have played or playing in the Premier League.

5. Luis Suarez
Luis Suarez played for Liverpool for several years before leaving for La Liga giants Barcelona.
The Uruguayan has done several dirty things while playing for Liverpool but the two incidents which were not common will be remembered forever by the Premier League fans. He abused Manchester United defender Patrice Evra and got a long term ban while the second one came a season later in which he bit Chelsea defender Branislav Ivanovic and the same punishment from the FA.

4. Diego Costa
Chelsea current striker Costa move to the Premier League last summer after impressing at Atletico Madrid. The Brazilian born striker is font of slapping and knocking players from his elbow. Last season, he intentionally stamped on Liverpool duo Emre Can and Martin Skrtel in a Capital One Cup semi-final.
While recently he slapped Arsenal defender Laurent Koscienly on the face and survived throughout the game. He picked up a yellow card but not for the slap.

3. Roy Keane
Manchester United midfielder Roy Keane was one of the most rough player in the Premier League in his era. Keane destroyed Alf-Inge Haaland in a challenge and later after his further bad behavior he was sent back to his home Ireland.
Despite of all this, he was still one of the best midfielder to ever play for Manchester United.

2. Joey Barton
Arguably he the most controversial player to ever play in the Premier League. Not only he is fond of his worst tackles and challenges but also the incidents he did to his teammate. Despite of having a quality touch as a midfielder his attitude and behaviour never gave him enough room to shine.

1. Duncan Ferguson
Duncan Ferguson played for Everton and Newcastle United in the Premier League from 1994-2006. The nastiest player on the pitch also fought two burglars at his home in 2011, making one of them injured.
The 6ft 4ins is one of the most famous player to ever spend three months in jail for head-butting an opponent, this incident happened when he was playing for Scottish club Rangers.