Despite the transfer period has ended the clubs can still sign some quality free agents. Here is a list of best free agents that can still be signed. 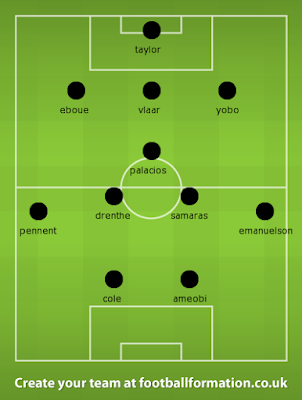 Here is the lineup for the Free Agents Eleven. Majority of the players from the lineup has played for big Premier League clubs including Arsneal, Liverpool, Tottenham and Everton.

Stuart Taylor
The former Arsenal and Reading goalkeeper is yet to join a new club despite of having a good trial at Charlton Athletic in the summer break.

Emmanuel Eboue
Another former Arsenal player who also played for Turkish side Galatasaray as a right-back for several season. However, he is currently finding a club.

Ron Vlaar
Dutch center-back who was a part of Netherland in last year’s World Cup is also a free agent. He was eyed by Manchester United manager Louis van Gaal.  Vlaar is currently recovery from his knee injury.

Joseph Yobo
Yobo an experienced center-half who has played for top clubs including Marseille and Everton. He was released by Turkish side Fenerbahce last year.

Jermaine Pennant
Former Liverpool and Arsenal winger didn’t sign a new deal with Wigan as they were relegated to League One. The 32-year-old winger is looking for a Premier League club.

Urby Emanuelson
The left-winger is still 29-year-old and has palyed for top clubs including Ajax, AC Milan and Roma. He was released by Atalanta at the end of last season.

Royston Drenthe
Former Real Madrid player is also available for free as he was released by Turkish side Kayseri Erciyesspor after the last season.

Georgios Samaras
Greek attacker who played for Celtic, Manchester City and recently West Brom is also in search of a new club.

Carlton Cole
West Ham released the English striker in the summer after failing to impress the new boss. The former Chelsea striker is linked with a move to MLS.

Shola Ameobi
The 33-year-old former Newcastle United striker is training with Championship club Huddersfield and is expected to sign a short term deal.